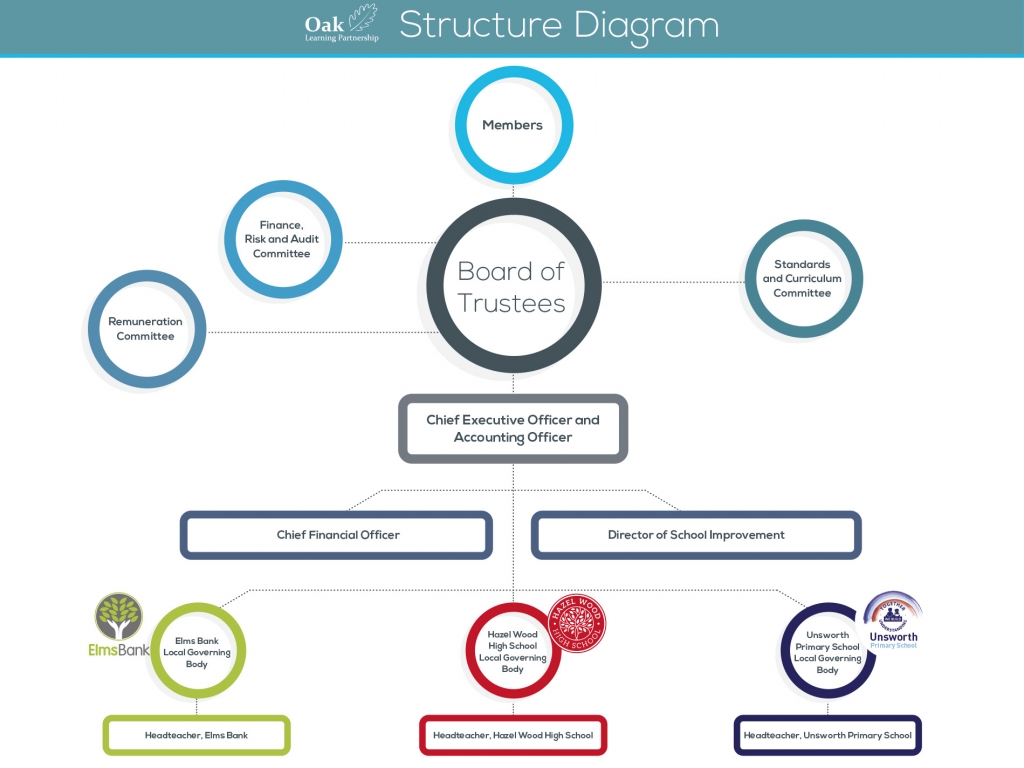 Our Members are similar to the shareholders of a company and act as 'gatekeepers' ensuring that the highest of standards are met in the operations of the Trust. However, unlike shareholders of a company, Members cannot take money or assets from the company. The Members have ultimate control over the Trust, with the ability to appoint some of the Trustees and the right to amend the Trust's Articles of Association (a document that defines the powers of the Trust and the powers of the Members and Trustees).

The Oak Learning Partnership is governed by the Board of Directors known as Trustees. The Board has overall responsibility for all operations and activities including the quality of education provided by Trust schools. It is primarily accountable to the Members of the Trust and also to external stakeholders and government agencies , including the Department for Education,for the work carried out by the Trust.

The Board's responsibilities are:

The role of the Trustees is to agree the vision for the organisation and to approve the strategic plan. Their role is strategic rather than operational. The Scheme of Delegation sets out where responsibility lies for each area within the Trust.

Oak LP has a Code of Conduct which all Trustees are asked to read and sign and Trustees are expected to be familiar with the Nolan principles of public life which apply to anybody appointed as a public office holder. The principles are selflessness, integrity, objectivity, accountability, openness, honesty and leadership.

The Standards and Performance Committee holds the leadership to account by, amongst other things, scrutinising external and internal pupil performance data. It shows how each school within the Trust performed both in terms of progress of pupils and raw attainment.

Understanding and managing the financial health of a charity is a vital part of a Trustee’s role. The audited accounts must be submitted to ESFA by 31 December each year, published on the website by 31 January and submitted to Companies House for publication within 9 months of the end of the accounting year. The Trust is required to have a risk register which identifies possible risks and sets out mitigation measures.

The Board of Trustees have established a structure of committees as follows:

These committees act in an advisory capacity to the Board of Trustees except where powers have been delegated specifically to them by the Board.

Each committee has terms of reference to explain its purpose and remit.

The Local Governing Bodies carry the Trust vision, values and priorities forward, based on the unique qualities of each school. Their responsibilities are described in the Oak Learning Partnership Scheme of Delegation. They support, question and challenge the school leadership team holding them to account for the standards in each school. The Local Governing Bodies have a clear communication route through to the Trust Board. The CEO receives their comments and questions and feeds back the view of the Trust Board in relation to these.